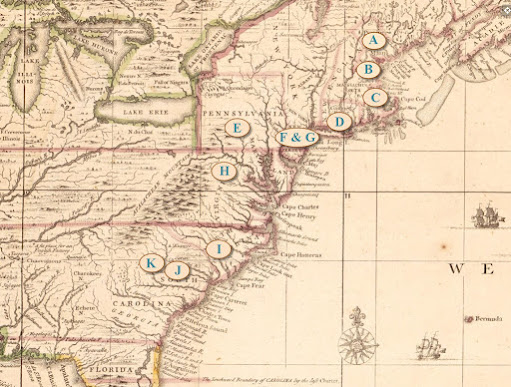 The primary Reeves' presence in Maine from some years prior to the Revolution until the 20th century descended from James Reeves. After his marriage in 1767 James settled in Jefferson, Maine (location A on the adjacent map) and is recorded as serving in the Revolutionary army a few years later.

Descendants of James Reeves are recorded as living in the area of Jefferson, Maine as late as the twentieth century. The post (at the Reeves, Reaves and More Rives blog), James Reeves of Maine, provides more information about him.

The map and above text both first appeared in November 2020 as part of post entitled "A Few More Colonial Early Reeves' Families" researched and written by Beverly for the blog Reeves, Reaves, and More Rives she co-authors and is included here with her permission. This article was a continuation of the piece she posted in May 2017 entitled "Early Reeves' Families in Colonial America" and which was subsequently replicated with additional detail in TRP. See page Index to Early Reeves' Families in Colonial America
Person Pages have been created within TRP for the following descendants of this individual. Please see footnote [F1] below.
NB     Since the article "A Few More Colonial Early Reeves' Families'' was written in November 2020, it has been established that the subject James Reeves was the son of another James Reves and this is reflected in the family group below.

[F1]   Family pages within TRP often may not document all of the known descendants of an individual.
For example, Person Pages are not generally created for those who died in childhood.
Please review the individual person pages to see if further offspring are listed there.

If complete branches of this tree are missing, you should first contribute person pages for the missing individuals and then via your Mentor Team talk page ask for this page to be updated.